How safe is your indoor swimming pool?

How safe is your indoor swimming pool?

(CNN) — Catherine Garceau doesn’t go to the pool anymore. The former Olympic swimmer has trained at many fitness centers over the years that smelled strongly of chlorine. While most would assume that means the water is clean, Garceau now knows it’s just the opposite.

After winning bronze in 2000 with the Canadian synchronized swimming team in Sydney, Australia, Garceau was a “mess.” Her digestive system was in turmoil, she had chronic bronchitis and she suffered from frequent migraines.

Garceau retired in 2002 and began looking into holistic medicine. Experts suggested detoxifying her body to rid it of chemicals, including what fellow teammates used to jokingly refer to as “eau de chlorine — the swimmer’s perfume.”

“As part of my journey to determine the factors that affected my health, I delved into the possible effects of chlorine and discovered some shocking facts,” Garceau writes in the appendix of her upcoming book, “Heart of Bronze.” 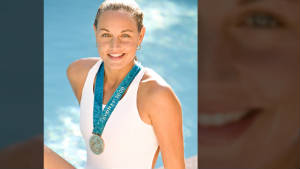 Catherine Garceau retired from competitive swimming in 2002 and began looking into holistic medicine.

Outdoor pool season is ending in many parts of the country, and competitive swimmers are heading indoors for their workouts and team meets. But how safe are the waters they’re diving into? Researchers are examining the longterm effects of the chemicals in pool water.

Chlorine inactivates most disease-causing germs within a fraction of a second. That’s why it’s found in our drinking water as well as 95% of pools in the United States, said Dr. Tom Lachocki, the CEO of the National Swimming Pool Foundation.

As Lachocki points out, access to clean water is what often separates first and third world countries. Without chlorine, swimmers are at risk of contracting many dangerous waterborne illnesses. But the chemical compounds formed in pools have some scientists worried.

“When you open up a tap and pour yourself a glass of water, you don’t normally put someone’s backside in it,” Lachocki said. “But in a pool there are people getting into that water. Every time a person gets in they’re adding contaminants.”

Those contaminants — sweat, hair, urine, makeup, sunscreen, etc. — combine with chlorine to form chloramines, said pool consultant and researcher Alan Lewis. Chloramines are what bathers smell when they enter a pool area; a strong smell indicates too many “disinfectant byproducts,” or DBPs, in the water.

Indoor pools create an additional a danger because of the enclosed atmosphere. Volatile chemicals from the water are transferred, often via vigorous activity like a swim team’s kicks, to the air. Without a proper ventilation system, the chemicals can hang around to be inhaled by coaches, lifeguards or spectators.

Some DBPs, like chloroform, are known as trihalomethanes, and are considered carcinogenic, Lewis said. They’ve been linked specifically to bladder and colorectal cancer.

Dr. Alfred Bernard is a professor of toxicology at the Catholic University of Louvain in Brussels and one of the world’s leading researchers on aquatic environments. He has published a series of studies documenting the effects of chlorine and its byproducts in swimming pools.

There’s an opportunity to throw the baby out with the bathwater.
Tom Lachocki, CEO of NSPF

In June, Bernard published a study in the International Journal of Andrology linking chlorine with testicular damage. Swimming in indoor, chlorinated pools during childhood was shown to reduce levels of serum inhibin B and total testosterone, both indicators of sperm count and mobility. Bernard notes in the study summary that the “highly permeable scrotum” allows chlorine to be absorbed into the body.

Bernard has also substantiated previous studies’ claims of a link between swimming in indoor chlorinated pools and the development of asthma and recurrent bronchitis in children. His 2007 study showed airway and lung permeability changes in children who had participated in an infant swimming group.

Reading these studies, it’s easy to forget that swimming itself is a great aerobic exercise that puts less stress on your joints than activities like running. In fact, it’s a sport often recommended for children with asthma because the humid, moist environment makes it easier for athletes to inhale and the breathing techniques can improve lung function.

“There’s an opportunity to throw the baby out with the bathwater,” Lachocki said. “Is chlorine perfect? The answer is no. [But] it’s fabulous, and if anyone comes up with something better they’ll be a millionaire.”

Dr. Ernest “Chip” Blatchley studies water disinfection systems with his team at Purdue University in Indiana. In their research, the team analyzes DBPs and other chemicals formed when chlorine and contaminants mix in pools. A swimmer himself, Blatchley believes the answer lies in finding a better system for water disinfection.

“The fact that these chemicals are being formed is, to me, a cause for concern,” Blatchley said. “A lot of this chemistry is just not known, and we need to do a better job at defining that chemistry.”

Blatchley is currently studying the effects of UV radiation on pool water. Other alternatives include ozone or salt water pools. But even salt water pools contain chlorine — the salt is used to generate chlorine in the water instead of a pool operator adding chlorine directly. While it reduces the danger of storing chemicals in the facility, the water chemistry is very similar, he said.

Perhaps the simplest solutions, Blatchley and Lachocki agree, can come from pool operators and patrons. Chlorine is effective when used in proper amounts and tested regularly. The National Swimming Pool Foundation offers training for professional and personal pool owners.

It’s also important for swimmers to minimize the amount of contaminants in the water. Almost 85% of the urea found on human skin can be dispelled by showering with soap before getting in the pool.

“It’s a public education thing,” Blatchley said. “Swimmers and the general public need to recognize that there’s a link between their hygiene habits and the health of everyone who uses the pool.”

And of course, the other preventive measure is common sense (although you’d be surprised how many people admit to doing it).

“If you don’t pee or poop in the pool, that’s cool too,” Lachocki said.

← That Strong Chemical Smell from the Pool is Chlorine Plus Urine.
Studies Reveal How Copper Imbalances Cause Mood Disorders, ADHD, Anger Problems and More. →