New research shows swimming pools can make you less of a man. 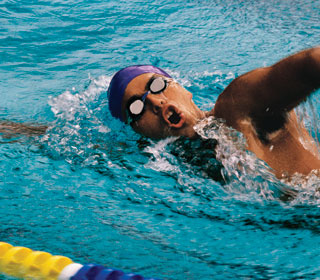 The Winter Workout You Want to Avoid

New research: Swimming pools can make you less of a man –

New Year’s resolutions to exercise more and live a healthier life send a lot of people to health clubs—a great idea, unless you plan on visiting the indoor pool while you’re there.

New research published in the International Journal of Andrology has found that chlorine, and the byproducts of disinfecting water with the chemical, had a rather unmanly side effect on young boys, and the researchers suspect that adult men could suffer the same fate, if swimming is a part of their daily exercise routine.

When pool water is treated with chlorine, the chemical reacts with everything that’s in the pool: the water, ammonia from sweat and urine, and the dozens of other compounds from personal care products that wash off people while they’re swimming. Those reactions result in chlorination byproducts such as chloramines, which can cause eye and respiratory irritation, and halogenated hydrocarbons, which animal studies suggest can damage a man’s testes and disrupt sperm development, increasing the likelihood of infertility.

Because of the high levels of pollution found in chlorinated swimming pools, these chlorination byproducts have the potential to disrupt a growing boy’s reproductive system and may have similar impacts on adult men. So the authors collected blood samples from 361 boys between the ages of 14 and 18 and compared those with how frequently they visited chlorinated swimming pools during their childhoods. Boys who’d attended indoor chlorinated pools for more than 250 hours before the age of ten, or for more than 125 hours before they were 7, were three times more likely to have low sperm levels or testosterone than kids who swam in pools disinfected with copper and silver. The chlorinated-pool swimmers sperm and testosterone levels were 20 percent lower than average for children their age, as well. And it wasn’t like these children were training as serious athletes. As little as one visit every two weeks was found to have an effect on sperm and testosterone levels.

One theory for the impact, the authors write, is that the skin around the scrotum is extremely sensitive and more likely to absorb chlorination byproducts than other areas, and the reproductive system is more vulnerable to chemicals during childhood and adolescence.

Low testosterone and sperm levels aren’t good for boys; they can delay puberty and result in abnormal genital development. And, says the study’s lead author Alfred Bernard, PhD, research director at the National Fund for Scientific Research and professor at the Catholic University of Louvain, Belgium, it doesn’t affect just younger boys. “We are now completing a study on competitive swimmers who show a similar decrease of serum inhibin B [a marker of sperm production] with the time spent in indoor chlorinated pools.”

Why indoor pools? “They’re more polluted,” he says. Because more people swim in an indoor pool than an outdoor one, there’s more junk floating around in the water, and pool facilities treat them with higher levels of chlorine.

The bad news is that even “safer” chlorine alternatives aren’t going to help boost men’s sperm levels. In the U.S., many clubs are switching away from chlorinated indoor pools to saltwater pools. If you’ve ever visited one, you might noticed the significant lack of an overpowering, eye-watering chlorine odor, but that doesn’t mean chlorine isn’t there. The systems essentially convert sodium chloride (salt) into sodium hypochlorite or, in other words, chlorine. “The chemistry is thus basically the same as when using other chlorine-based disinfectants,” Bernard says.

The good news, though, is that you don’t need to worry about drinking water, which is often chlorinated with the same compounds as swimming pools. “The impact of tap water on testicular function, if any, should be much lower than that of swimming pool water,” he notes. “Tap water is much less polluted by organic matter and thus by chlorination byproducts than public swimming pools.”

But what should you do if you like to swim? Here are a few suggestions:

• Find a safer “safe” alternative. As public health officials—and swimmers—become more aware of the damages of chlorine disinfection, they’re looking for alternatives to traditional chlorine gas. The two most popular, aside from saltwater pools, are ozonated pools and copper-silver disinfection systems. No organization maintains a list of which pools use these technologies but this informal swimming blog may give you a few places to start.

• Make your workouts seasonal. Lacking a safe indoor swimming environment, you might consider finding another way to exercise in winter, and definitely keep kids away from strongly chlorinated pools. “This type of swimming pool, easily identifiable by a strong chlorine smell, may indeed pose health risks that largely outweigh the benefits of swimming,” Bernard says, particularly for children. Just like your food, stick with seasonal alternatives, like snowshoeing.