An Introduction to Ions: Understanding the latest sanitation technology takes a little knowledge of atoms and electrical charges. 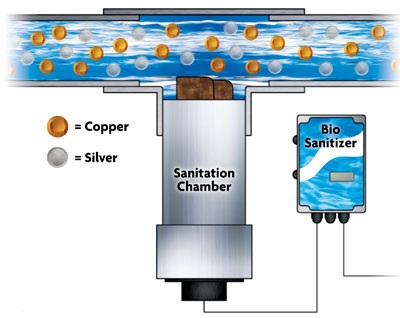 It has been known since the time of the Greeks that copper has special properties that prevent the fouling of drinking water and provide sanitation. What the early Greeks did not understand was it was not the copper metal, but ions of copper, that kept their water safe to drink.

The idea of using copper and silver ions to keep drinking water safe for humans was adopted by NASA for the Apollo Project and subsequent shuttle missions.

Currently, hospitals are using copper and silver metal on door handles and tables to prevent the spread of disease by surface contact, as well as in drinking water for patients.

More recently, the idea of using copper and silver ionizers to prevent the growth of bacteria, fungus and virus in swimming pools has gained considerable momentum. Let’s look at some of the science behind how copper and silver work to keep a pool safe and pleasant to use.

All about ions
Everything on Earth, from the water in our swimming pools to the base molecules of life itself, is made from tiny particles called atoms. Every atom is comprised of three things: positively charged protons, negatively charged electrons and neutrons that have zero charge. Located at the center of every atom are the protons and neutrons that together make up the nucleus. Flying around the nucleus are the electrons.

An ion is simply an atom that possesses a charge. To achieve this, an atom must either gain an electron to form a negative ion (anion) or lose an electron to form a positive ion (cation). It is the imbalance between protons and electrons that form ions. For example, if an atom of copper somehow lost two electrons, it would have 29 protons and 27 electrons. This would result in an atom that had 2 more protons than electrons, leading to the formation of a copper ion with a +2 charge.

How ionizers work
A pool ionizer is simply a device that generates ions by means of a chemical process called electrolysis — often with little or no self-regulation.

Electrolysis is the process of passing electrical current through metal rods (copper and silver) that are submerged into a solution — usually water — that contains trace amounts of salts. The salts employed could be sodium hypochlorite or sodium chloride, among others. When an electrical current is applied to copper or silver, the atoms start to absorb electrical energy. Once enough energy is absorbed, the atoms begin to eject electrons and become cations. These cations, unlike the metal atoms they are made from, are soluble in water and will diffuse into the pool, where they immediately go to work preventing biological pathogens from taking over.

All living things are composed of proteins, enzymes and DNA (viruses typically have a similar genetic molecule called RNA). All of these biological systems are absolutely critical in order for an organism to function properly. If any one of these systems are interrupted, the natural functions of the organism will stop — and if the interruption is serious enough, the organism will die.

It has been demonstrated that copper and silver ions have the ability to interact in a negative way with the membrane of pathogens. This negative interaction will cause the cellular membrane (outer barrier) to become “leaky,” allowing some of the cellular contents to spill out — a process that kills the cell.

Another mechanism of action for copper and silver ions is binding to DNA, or to other large biological molecules such as proteins. Once this binding has been established, the copper or silver ions begin to generate radicals that react immediately with the target biomolecule. The metal ion is capable of repeating this process again and again, resulting in multiple-hit damage to the same target biomolecule.

Copper and silver ions are also believed to disrupt the production of new enzymes in pathogens.

What ionizers do in a pool
A typical swimming pool uses 2 to 4 parts per million (ppm) of sodium hypochlorite to keep the water free of pathogen contamination. If one desires to utilize copper/silver ions to keep a pool pathogen-free, substantially less chlorine is required. It has been shown that when used in conjunction with silver and copper ions, a low concentration of chlorine is actually more effective at inactivating Legionella pneumophila, the bacteria that causes Legionnaires’ disease.

The concentrations of copper and silver ions are typically kept very low for two reasons. The first is that it they are effective at low concentrations, so it makes little sense to add more if a higher concentration would not do anything useful for the pool environment. Second, a standard pool ionizer may add too much copper to the pool, creating a blue stain. The silver ion concentration should be maintained at 30-40 parts per billion, and the chlorine levels should be kept at 0.4 ppm.

In short, ionization provides many of the benefits of disinfection while offsetting some of the chemical and environmental concerns common in traditionally sanitized pools. For customers in search of a “green” solution to their sanitation needs, this technology may be refreshing in more ways than one.

Russell Betts is chief scientific officer at Go Chemless. He holds a Ph.D. in organic chemistry and has been involved in chemical research for more than 20 years.