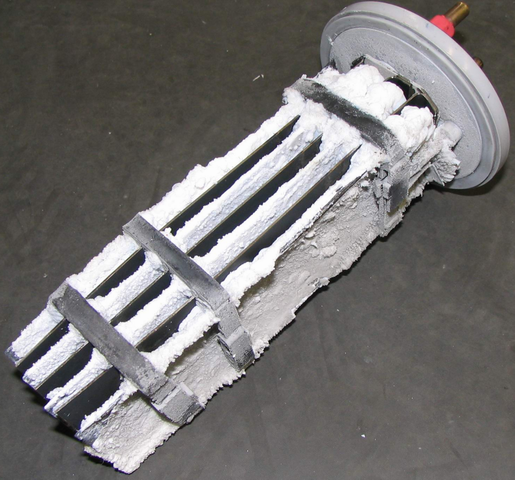 Salt chlorine pools have become quite popular for their convenience. There are no hazardous chemicals on site, water is sanitized and oxidized automatically. There are little to no chloramines. Many users of salt generators claim softer feeling water with less chemical odor and no dry or irritated skin.

Along with the report of these benefits, some have also reported some strange phenomena as well. These include things like discolored water, strange stains throughout the pool that are hard to remove and prevent. Stains appearing in salt pools include:

Chlorine generators work using a process known as electrolysis. In nature chlorine is found primarily in the chloride ion, which is a component of salt found in the earth or the oceans. Electrolysis is the means of generating chemical products from their native state. A salt generator works by passing electricity through a solution of sodium chloride to produce chlorine as a disinfectant or sanitizer.

The most popularly used chlorine generators are the in-line type. In these systems salt water is circulated over electrochemical cells. The cells convert the sodium chloride to free available chlorine. The cells used in these systems are typically made of titanium. Though it may seem new the technology of splitting molecules via electrolysis goes back all the way to the 1700s.

• 1789 – First use of electricity to separate compounds- electrolysis

Galvanic corrosion occurs when dissimilar metals exist in a high TDS solution such as a salt generator pool. Some metals are nobler and more cathodic meaning positive currents flow from these and they tend to steal electrons from the less noble anodic or negative metals.

There are three things needed in order for galvanic corrosion to occur:

1. Electrochemically dissimilar metals must be present

3. The metals must be exposed to an electrolyte (salt in solution)

In a swimming pool all three of these exist due to the high TDS from the salt content of the water. The electrochemical cells in most chlorine generators are made of titanium which is listed on the Galvanic Corrosion Chart as a nobler metal. Most pools contain some copper in the system as well in the heat exchanger or in any brass fittings or pipe that may be in the system. Copper is a less noble metal than titanium and thus it corrodes as a result of the electrolysis in the high salt solution. This leaves black stains and debris in the pool. Copper is also rendered insoluble in the water. Copper in the water will appear as a green translucent color.

The simple solution to solve this problem is to find another less noble metal to use as a sacrificial anode that corrodes but doesn’t cause staining. When differing metals are added to salt water one metal acts as a cathode this is the nobler of the two. Titanium would be one example of a more cathodic or noble metal. The other metal may be more anodic or less noble. An example of this would be copper.

Galvanic corrosion occurs because when these two metals are in salt water with an electrical current the weaker less noble metal (copper) will corrode faster than normal. Also the stronger more noble metal (titanium) will corrode much slower than normal. It has been found in various marine industries that the addition of zinc in these types of systems prevents the corrosion of copper and stops the staining.

Zinc is very low on the galvanic chart and is one of the most anodic metals found. In salt chlorine pools zinc can be added as a solid weight into the skimmer or attached in the circulation system. This slows or stops the corrosion of copper. If the water is discolored from copper it is advised to use a metal removal product along with the zinc to remove the current discoloration and prevent reoccurrence. Most metal products on the market tend to be phosphate based and this too can cause problems in a salt chlorine generator. When selecting a metal product use a phosphate free product.

What about purple haze?

Another mystery in both salt generator and regular pools is the occurrence of a strange purple coloring and debris. This is due to high levels of cyanuric acid and insoluble copper in the water. If pH and alkalinity go low than copper cyanurate is formed leaving a purple residue along the water line and around lights and steps. The solution here is to lower cyanuric acid down to 35ppm to 50ppm and adjust up the alkalinity and pH. Also, the addition of zinc will help keep copper from corroding into the water.

These simple methods should help clear the mystery and remove the stains.