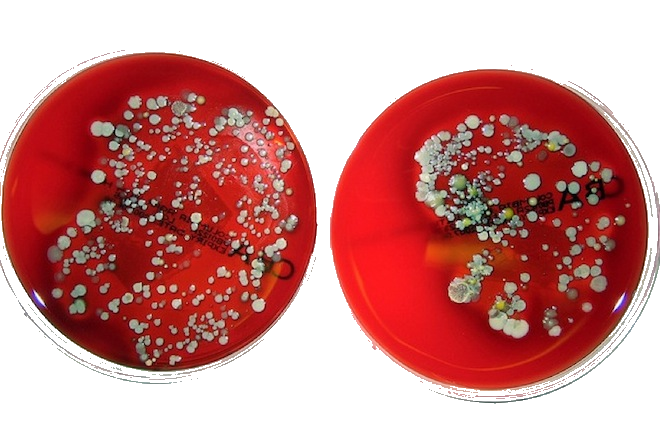 Independent laboratory results show that Colloidal Silver (BP) particle size is no more than 8 nanometres and furthermore is demonstrated to be active against Methacillin Resistant Staphylococcus Aureus (MRSA) within 8 minutes.  In this experiment, the efficacy was tested against the bacteria Staphylococcus aureus at four and eight minutes. The subject sample BP (24.20 ppm), showed signs of antibacterial activity equally against both the S1 and S2 strains. At four minutes BP began to inhibit the bacterial growth, while at eight minutes BP significantly reduced the bacterial growth.

Superbug Strain (MRSA) Hits The Healthy Schoolchildren, athletes, inmates have fallen victim Spread by skin contact, thousands infected in U.S. NEW YORK—A drug-resistant superbug that spreads by skin contact is infecting thousands of people across the United States and may now have reached Europe. The MRSA bacterium, or methicillin-resistant Staphylococcus aureus, can be resistant to many antibiotics. It has long been a serious problem in hospitals and nursing homes, where it infects the wounds of patients weakened by disease or injury. But it now appears that a new strain is emerging that spreads through skin contact and can even infect healthy people.

Clusters of skin infections caused by MRSA have also been described among aboriginals in Canada. “We are greatly concerned that MRSA has emerged in the community in people with no ties to health care,” says Scott Fridkin, a medical epidemiologist at the U.S. Centers for Disease Control in Atlanta, which has begun investigating the outbreaks.The strain has been spreading like wildfire in crowded jails but there have also been numerous smaller outbreaks in towns and cities across the United States in recent months. Most of those infected are gay men, but the superbug is certainly not restricted to this group. Athletes, schoolchildren and newborns have all fallen victim. The infections usually appear as sores that resemble insect bites. If not treated properly, nasty abscesses and boils can develop, requiring repeated courses of antibiotics and even surgery. If it reaches the lungs or bloodstream, MRSA can cause pneumonia or septicemia, which can be deadly.

Officials do not have exact numbers of infections because MRSA is not a notifiable disease in the United States. But Elizabeth Bancroft of the Los Angeles County Health Department, who is leading the investigation there, says calls to hospitals suggest there have been “scores” of infections among gay men in the city, and that 35 children have been admitted to hospital. Los Angeles health officials are also battling to contain an outbreak in the county jail that has so far affected almost 1,000 inmates, with 66 needing hospital treatment. Cases of community-acquired MRSA are also emerging in other U.S. cities, including New York, Boston and Miami. The San Francisco Health Department is so concerned it has sent out MRSA alerts to masseurs, gyms and sex-club operators.”We’re monitoring the situation very closely,” says Diane Portnoi, the chief investigator at the department. “Most likely there have been some deaths due to these cases. But we don’t know for sure because we just don’t record MRSA deaths.”

The superbug is infecting healthy HIV-negative gay men as well as those infected with the virus. Health officials suspect that the large number of cases among gay men are due to skin-to-skin contact during intercourse, rather than sexual transmission, and the fact that many gay men have multiple sexual partners.But those involved in contact sports are also at risk. In Texas last September, for instance, there were 50 cases among schoolchildren in Pasadena, some on the football team.

The Centers for Disease Control (CDC) are still analyzing the bacteria responsible for these outbreaks. But Bancroft says initial tests show the same strain is responsible for all the outbreaks in Los Angeles, and that it appears to be the same as a strain first isolated in New York in 1997. It may be more virulent because it has a gene called PVL, which codes for a potent toxin. Fortunately this strain is still susceptible to several common oral antibiotics. The first line of treatment is simply good wound care, Bancroft says. For more information the CDC Web site is http://www.cdc.gov/ncidod/hip/Aresist/mrsafaq.htm