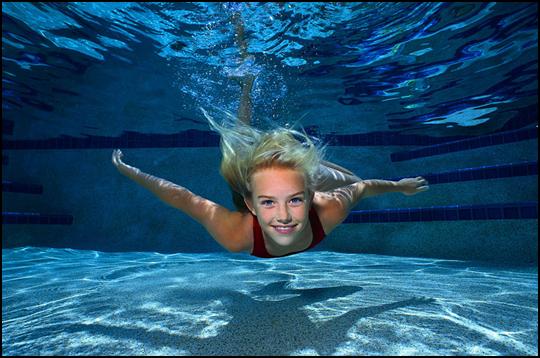 When you swim, some water is going to get into your mouth. For the most part, that is OK. In recreational pools chlorine is used to kill germs although it can take its sweet time killing some of them.

However, in 1999-2000, more than 2,000 Recreational Water Illnesses (RWIs) and four deaths occurred because of water system failures in recreational pools. The most common RWI by far is diarrhea which affects thousands who accidentally swallow infected pool water.

This was 10 times the rate of the decade before, Michael Beach, epidemiologist at the Centers for Disease Control and Prevention in Atlanta, tells WebMD. Most swimming pool outbreaks go unrecognized and unreported. In the last decade, he estimates, pool outbreaks have affected 10,000 people.

On average people have about 0.14 grams of feces on their bottoms which, when rinsed off, can contaminate recreational water. People who have diarrhea have millions of germs. If a swimmer has diarrhea, he or she can contaminate water if he or she has an “accident” in the pool.

A particularly nasty customer that can be swimming alongside you is cryptosporidium, a parasite that laughs at chlorine and can cause diarrheal distress. The approximate disinfectant time in chlorinated water for this germ is nearly seven days. In the very young (say, that newborn you are “flying” through the water) or those with immune problems, crypto can cause severe debilitating illnesses. Some water parks have — charmingly — been described as “diarrhea farms.”

“Crypto,” says Beach, “can live in a chlorinated pool for days. Chlorine kills other organisms in a fraction of a second. This is a totally different beast.”

Other unwelcome swim partners include E.coli, Giardia, and Shigella. “We see 2 million cases a year of Giardia,” Beach says, speaking of other frequent fecal contaminants.

Americans, with their light-hearted “I don’t swim in your toilet” signs, are pretty realistic — if a little misguided — about “group bathing.” In May of 2004, Opinion Research Corporation (ORC) conducted a survey of nearly 1,000 people over the age of 18. Among the findings:

After relieving themselves (pun intended) of the above opinions, respondents to the ORC poll reported:

Michael W. Shannon, MD, is chief of emergency medicine at Children’s Hospital in Boston. He says there seems to be a natural uptick in gastrointestinal illnesses in kids in summer, but he had never related it to gulping pool water before. “You could argue we are not looking for the pool as a cause,” Shannon says. “Now I will be.”

Eyeball Before You Cannonball

The Centers for Disease Control recommends using your senses to evaluate a pool before jumping in:

How to Be a Good Pool Citizen

But think about it — how many pool owners will you see gulping pool water this year in a public pool?

“Right now there is no quick fix for water-borne illnesses,” Beach says. “Standards vary by state. All you can do is be realistic. Chlorine does not kill everything.”

Don’t stop swimming, he says, but be healthy and responsible about it.