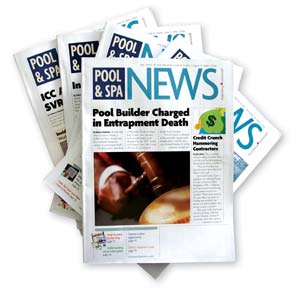 Three recent studies have linked some chemicals found in pool and spa water with cancer.

Researchers from the Barcelona-based Centre of Research in Environmental Epidemiology (CREAL) and Research Institute Hospital del Mar, along with a scientist from the U.S. Environmental Protection Agency, released three papers that correlate certain byproducts of chlorine sanitizers with bladder cancer.

The chemicals are common sanitation byproducts, and the studies have focused on the potential health effects of their presence in the water of indoor pool and spa facilities.

One of the papers also finds ties between regular indoor pool use and respiratory problems. The results were headlined in a front-page article on the popular health Website WebMD.com.

The studies make few specific recommendations for pool owners and operators, but they tend to focus on chlorine — or, rather, its byproducts — as the source of the problems.

“I think it’s important to differentiate the application from the root cause,” said Ed Lightcap, a senior account manager at DuPont Chemical in Wilmington, Del. “Chlorine has not done humans a disservice overall; it’s extended our longevity by killing infections.”

Though WebMD undoubtedly will increase the studies’ media exposure, this research serves mainly to confirm existing conclusions.  “I think it’s much more confirming that, yes, these things [can] cause problems,” Lightcap said. “It’s expanded confirmation that these things do happen.”

The culprit in the cancer issue is the chemical compound class called trihalomethanes, or THMs. Above certain exposure levels, these compounds have been scientifically shown to lead to cancer in people and animals, Lightcap said. “In humans, bladder cancer seems to be the most common manifestation,” he noted.

Though water-transmitted THMs have been linked to bladder cancer in previous studies, Lightcap said, “typically [it’s discussed] in relation to shower water. Lately, some research has been focusing on pools, too.”

The scientists also tracked a certain substance in the body, known as CC16, that can pass from the lungs into the bloodstream at a variable rate. “The more that’s passing through the lung membrane into the blood, the more damage to the liner of the lungs that’s indicating,” Lightcap said.

“But to get all the way to asthma,” he added, “I don’t know. That could be anecdotal.”

Increased lung permeability also could be explained by temporary changes that the body’s respiratory system undergoes during physical activity. “Oxidative stress [during exercise] will cause damage to certain lung cells,” said Thomas Lachocki, Ph.D., CEO of the National Swimming Pool Foundation in Colorado Springs, Colo. “But that’s normal, and even positive in many ways. And the body is continually repairing that damage.”

Progress in the direction of practical health solutions may be quicker if researchers focus not only the chemical itself, but on dosage patterns. “It isn’t chlorine,” Lightcap said. “It’s the way chlorine is used. A well-ventilated facility with a chlorine residual maintained around 1 ppm is probably the best-case scenario.”

The simplest solution may be to get proactive: A well-cleaned pool is much less likely to require higher levels of chlorine. And many THMs can be significantly reduced by keeping water regularly filtered or scooped for organic contaminants.

Still, it’s becoming clear that these pool-related health concerns will not simply disappear anytime soon. “It’s imperative that people in our industry get out ahead of it,” Lachocki said. “It’s imperative that retailers, service technicians, and facility operators receive verifiable training, so they’re at least aware of these issues.”