Home » How it Works!

The Go Chemless micro-processor computer works by delivering a precise amount of elemental ions into your pool water to prevent algae, bacteria, viruses, mold and fungus from taking over your swimming pool. Unlike chlorine, which breaks down very quickly, the Go Chemless ions are available for bio sanitization over and over again.

Go Chemless has developed a method to use precious base metals to generate CU+2 and AG+ ions that are responsible for the bio sanitizing process.

What is an ion?

Ions are charged particles that exist naturally in our environment. In fact many ions are absolutely necessary to support life including human life! The best example is table salt (sodium chloride, NaCl) which is made from one ion of sodium (NA+) and one ion of chloride (Cl). Without ions like sodium (NA+), Potassium (K+) and Calcium (Ca+2) your heart would not be able to beat because it’s the ionic action between these three main electrolytes that make your heart contract and relax millions of times in your life.

How does my Go Chemless unit generate copper (II) and silver (I) ions?

Your Go Chemless unit generates Copper (II) ions and Silver (I) ions through a process known as electrolysis. During electrolysis a small electrical current is passed between copper and silver rods. This forces some of the atoms to surrender two electrons (Cu++) or one electron (Ag+) thus forming water soluble copper (II) and Silver(I) ions, respectively. These newly generated ions are carried into your pool through the pump system and immediately put to work keeping your pool or hot tube free of bacteria, fungus, algae and viruses. Because they are single atoms, they are not affected by filtration systems including diatomaceous Earth filters. They pass right through and into your pool many times over to do their job of biosanitizing.

What is “bio sanitizing”?

The use of metals in water disinfection techniques is not new. Early Greeks used copper and silver goblets and vessels for drinking and storage purposes. The low solubility of these metals served as a natural, controlled release mechanism which added trace amounts of these ions to the water. Such amounts were high enough to purify the liquid without causing objectionable taste. Today, Silver is commonly used in the medical field as a disinfectant and antiseptic.

The copper (II) ions and silver (I) ions generated by the Go Chemless interact with the outer membranes of bacteria, fungus, algae and viruses. This interference quickly leads to the loss of membrane integrity and the death of the target organism. In the case of algae, copper (II) prevents photosynthesis thus leading to the death of the organism due to insufficient energy production. In the case of highly resilient pathogens such as Legionella (the bacteria that causes Legionnaires Disease) the silver (I) ions bond to and kill these pathogens. In fact, many hospitals around the world use copper/silver ionization systems to purify drinking water.

Copper (II) and silver (I) ions have also been demonstrated to interfere with the DNA of bacteria, fungus, algae and the RNA of viruses. We all know that DNA is the building block for all life and once DNA/RNA is interfered with the organism cannot function properly and will die.

Copper (II) and silver (I) ions kill bacteria, fungus, algae and viruses through copper/silver mediated protein damage. In all living things proteins are generated to do the workings of the organism. Everything from making muscles to growing hair is the result of a protein. If proteins are damaged normal cell functions won’t take place and the organism will die as a result.

Copper (II) and Silver (I) ions are not unique in their abilities to kill bacteria, fungus, algae and viruses. In fact most metal ions will kill all of these things.

Unfortunately, most heavy metals are toxic to humans! This is why the scientists at Go Chemless have chosen copper and silver. There is a mountain of historical and scientific data to demonstrate the safety and effectiveness of copper (II) and silver (I) ions for keeping water safe to drink as well as swim or bathe in.

The good thing about copper and silver is that it has been shown to be completely safe for humans. Chlorination can not make that claim. Below is an excerpt from a study about biosanitization conducted by Charles W. Beer, Ph.D.:

“Experimentation and publication by Gerba and others (10)(11)(12)(13)(14) indicates that 300-400 ppb of copper and 40 ppb silver combined with 0.1 ppm -0.4 ppm of chlorine is more effective in controlling a host of microorganisms, including coliform, than the use of higher levels of chlorine [emphasis added]…”

A full copy of this very informative scientific study is available upon request from Go Chemless. 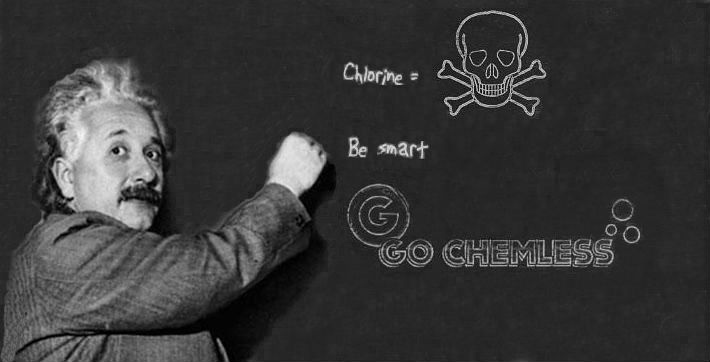