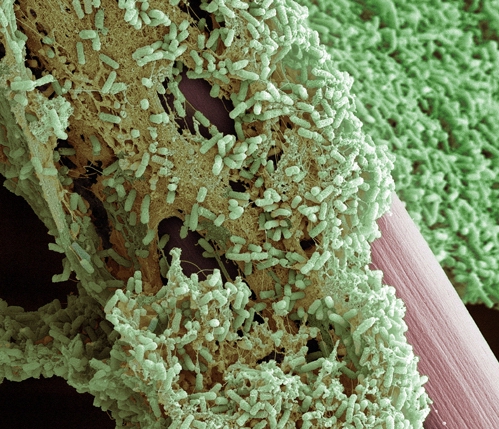 ST. LOUIS, Jan. 13 —  Most folks wouldn’t last long without telephones, traffic lights and television, not to mention plain old talk. Communication is vital to just about everything we do. It’s the same with bacteria. Until recently, microbiologists saw them as solitary beings floating out of touch with one another in the vastness of the human bloodstream or a gallon of milk.

NOW SCIENTISTS have discovered that bacteria talk to one another constantly, often cooperating in the construction of intricate multicellular communities, known as biofilms, that allow them to thrive in ways they never could as single-celled individuals. Unfortunately, these bustling bacterial cities often create debilitating or life-threatening infections inside the human body. But scientists hope that disrupting bacterial communications might offer a new way of treating these infections. “Bacteria really like to grow in communities, covered in slime,” biofilm expert J. William Costerton said during a recent briefing sponsored by the Council for the Advancement of Science Writing and Washington University in St. Louis. Biofilms have been found in the lungs of patients with cystic fibrosis and on the gums of people suffering from periodontal disease. They have been associated with tuberculosis, prostatitis and the chronic ear infections that plague many young children. They are especially prevalent on catheters, artificial heart valves, contact lenses and other implanted medical devices. Costerton estimated that biofilms account for the majority of chronic bacterial infections.

As researchers identify the signals bacteria use to build and maintain biofilms, their biotechnology colleagues are following right behind, trying to develop new antibiotics that interfere with bacterial communication. Microbiologists first realized the importance of biofilms about a decade ago, when Costerton and several colleagues began using a new kind of microscope to look at slimy masses of bacteria such as Pseudomonas aeruginosa, which clogs the lungs of cystic fibrosis patients. In 1991, the scientists demonstrated that they were not just undifferentiated clumps, but intricate structures threaded with pores and channels for transporting nutrients in and waste out. The bacteria were embedded in a sticky protective goo that stuck them to one another and just about anything else that might be around. Just as social scientists marvel at the differentiation of cities into distinct neighborhoods, microbiologists have been amazed at the intricacy of biofilms. The unpleasant film that coats a person’s mouth overnight, for example, is actually a highly organized bacterial community so complex that it almost seems a shame to just brush it all away. The typical dental plaque contains hundreds of different species. The outermost ones couldn’t even survive if their inner neighbors didn’t first lay down a suitable substrate. “Only the first few can stick to you teeth,” said Bonnie Bassler, a Princeton University biologist who received a MacArthur “genius” award this year for her research in bacterial communication. “The rest stick to them.” Their layered structure makes biofilms hard to kill with traditional antibiotics, which often cannot penetrate beyond the outermost suburbs of a bacterial settlement.

More importantly, current drugs such as penicillin and erythromycin were designed to work against rapidly growing and dividing cells. But most of the bacteria in biofilms are hunkered down in a semi-dormant state, making them much harder to kill with existing drugs. Recent studies also show that bacteria also synchronize their behavior when they create a biofilm, simultaneously turning on different genes than they use while floating around. And many of those genes make them even more resistant to traditional antibiotics. “The entire conglomerate changes its gene expression at once,” Bassler said. “Hundreds of genes switch from on to off or off to on.” Bassler won her $500,000 MacArthur grant for research into the chemical signals bacteria use to tell each other when to turn on genes governing biofilm formation and other coordinated behaviors. The microbes essentially communicate by smell, releasing chemicals into the environment that are picked up by nearby individuals. Bassler estimates that bacteria produce dozens of these signals, but so far she has investigated only two. “This is a baby field,” she said. Even so, researchers believe they can find ways to block bacterial communication. For example, a drug that blocked the right signal could prevent biofilm formation altogether. Signal blocking might also disable a biofilm’s resistance to antibiotics, or prevent the bacteria in it from producing a harmful toxin. Using a different strategy, a drug could mimic signals that prevent biofilm formation or cause existing biofilms to break apart.

A small biotechnology company, Quorex Pharmaceuticals, is already trying to develop drugs based on Bassler’s research. If the company could manufacture a chemical that discouraged biofilm formation by Pseudomonas aeruginosa, for example, it would be a boon for cystic fibrosis patients, most of whom die of infections caused by the bacteria. “There’s this buildup of people getting closer and closer to identifying these mechanisms,” said Bart Henderson, vice president of business development for Microbia, Inc., of Cambridge, Mass., another biotechnology company that is working in the field.

In September, Microbia scientists announced that Staphylococcus aureus – a cause of food poisoning, pneumonia, toxic shock syndrome and many other infections – bolsters itself against antibiotics when it forms a biofilm by turning on a gene called fmtC. When the researchers disabled the fmtC gene by mutating the bacteria, the microbes’ sensitivity to antibiotics returned. That experiment suggests a drug that blocks the effects of fmtC might prove effective against biofilm infections. Henderson said Microbia has already found a number of chemical compounds that appear to do just that. This is new territory,” he said. “Trying to harness the physiology in ways we couldn’t before is really exciting.”