Your Local Swimming Pool May Surprise You. 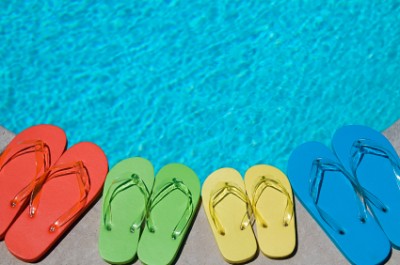 Your Local Swimming Pool May Surprise You –

We’re in the dog days of summer, so many of us seek some heat relief in a cool swimming pool. Unfortunately for pool lovers, a study released in 2010 suggests that chemicals used to disinfect pools — and drinking water — mutate into carcinogenic, or cancer-causing, agents.

Researchers examined 80 water samples from two swimming pools in Barcelona, Spain. They wanted to identify the levels of carcinogenic disinfectant byproducts in the pools. When disinfectants react with organic substances from swimmers — for instance, urine, sweat and hair — the reaction produces these byproducts.

Swimmers absorb harmful byproducts through the skin or inhale them. But however they get into someone’s body, the byproducts can cause bladder cancer.

Researchers compared disinfected drinking water with pool water and discovered that both types of water contained the same amounts of carcinogenic byproducts. So, in or out of the pool, disinfected water poses a cancer risk.

The researchers did not analyze water from the large number of pools treated with any of the many other various types of disinfectants used in pools. Nor did the study take into account how often the different pools from which they collected samples were cleaned.

Even so, as with the Barcelona study, a separate study published in 2010 that involved examining swimmers to determine the levels of certain toxins in their bodies, showed that swimming pool disinfectants can cause cancer.

If this news makes you want to skip a dip in the pool, there are other ways to get that swim in. You can always swim in freshwater lakes or the ocean; and saline pools are less full of traditional disinfecting chemicals than chlorinated pools. And as for drinking water, pick up either a filtered pitcher or use a tap water filter that removes disinfectants.