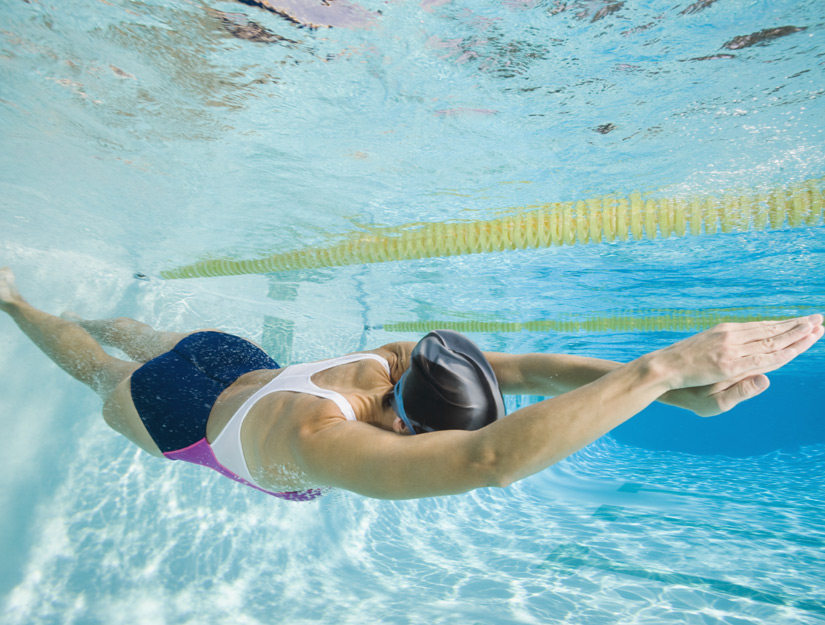 A new collection of studies show a rise in blood markers associated with cancer in swimmers using chlorinated pools.

Swimming in a chlorinated pool may increase your risk of developing cancer, suggest a new suite of studies, which identified more than 100 chemical byproducts in pools that use chlorine as a disinfectant.

The work is too preliminary to suggest that people should stop swimming, said Manolis Kogevinas, an epidemiologist at the Center for Research in Environmental Epidemiology in Barcelona. The studies were small, and they found a rise in blood markers that have been associated with cancer — not a rise in cancer itself.

“People should not be afraid of swimming, but we should get more research on whether there are better practices for disinfecting pools,” Kogevinas said. “It’s all a matter of costs and benefits.”

Chlorine is really good at killing microbes in swimming pools. Over the years, though, scientists have become concerned about its possible health effects. In water, chlorine reacts with sweat, urine, skin cells and other organic materials to produce all sorts of chemical byproducts. In animal studies, some of those chemicals have been linked with asthma and bladder cancer.

In a new study — one of three just published in Environmental Health Perspectives — chemists for the first time analyzed exactly what was in chlorinated water from a public swimming pool in Barcelona. They identified more than 100 chemical byproducts in the water. Many were toxic. Some had never been found in swimming pools or in chlorine-treated drinking water.

For the other two studies, 50 healthy adults swam laps for 40 minutes. The researchers measured levels of a number of substances in the blood, urine and breaths of the swimmers, both before they got in the pool and after they emerged. Each measurement looked at a marker, or sign of what was happening in the body.

The scientists expected to find some sign of respiratory distress. Previous studies have shown higher rates of asthma in lifeguards and competitive swimmers, as well as higher rates of eye, nose and throat irritation in pool workers.

Among a variety of markers for respiratory problems, though, the new work found that swimming led to a rise in just one. This marker showed an increase in how easy it is to penetrate the lining of the lungs. That’s a sign, scientists think, of inflammation and a higher risk for asthma allergic diseases.

The most striking results came from the part of the research that looked at markers for cancer. After 40 minutes of swimming, the study found, people showed a large rise in markers of DNA damage that can lead to cancer. Concentrations of four of the most common byproducts were seven times higher after people swam.

Chlorine’s chemical byproducts can get into our bodies through the skin. Exposure also comes from breathing air at the surface of the water, where chemicals become volatile. When exercisers swim hard, they breathe faster and end up with even more exposure.

It’s far too soon to conclude that these short-term changes lead to long-term health problems, said Alfred Bernard, a toxicologist at the Catholic University of Louvain in Brussels, Belgium.

But he thinks there’s already enough reason to swim with caution. His own work suggest that chlorine byproducts are a major risk factor for rising rates of asthma, airway irritation and allergic diseases, especially during windows of sensitivity in babies and young children.

“We have good evidence that you have to be careful with these chemicals,” Bernard said. “Maybe chlorine is not the best choice for disinfecting swimming pools.”

Alternatives do exist. Some pools use ozone, copper and silver ions, or even moss to kill bacteria.

Even if pools continue to use chlorine, there are ways to reduce how much of it they use, Kogevinas said. Regular emptying and cleaning of the pool helps. So does introducing freshwater.

Swimmers can make a difference, too. By simply showering before they get in the pool, they wash off much of the organic material that reacts with chlorine to produce toxic byproducts. Swimming, Kogevinas added, is still healthier than not exercising.

Just choose your pools wisely, Bernard advised. If you go to a pool with a strong chlorine smell, and you see children with skin rashes or breathing problems, find somewhere else to go.

“Parents send their children to pools because they want to do something good for them,” Bernard said. “But we actually don’t know the long-term effects. It’s an irony if there is something bad in there.”

← Water-Borne Illnesses at New Highs.
Your Local Swimming Pool May Surprise You. →