Go Chemless Info About The Long Term Effects of Chlorine on Swimmers. 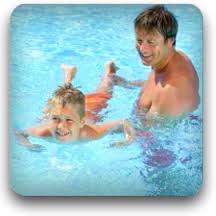 Swimming pools are commonly chlorinated for sanitation purposes. Chlorine kills harmful microorganisms that can cause rashes, diarrhea and many other health problems. According to the American Chemistry Council, chlorine is used as a disinfectant in most public swimming pools and 90 percent of residential swimming pools in the United States. However, swimmers may face adverse effects from exposure to chlorine.

Chlorine reacts with proteins from your body to form a group of chemicals called chloramines. These dangerous chemical vapors generally linger directly above the surface of a pool. Inhalation of these vapors irritates the lining of the respiratory tract and has been associated with asthma and airway inflammation. This is generally a problem limited to indoor pools, due to the lack of circulating fresh air.

Many commercial swimming pools are sanitized with chlorine gas, rather than chlorine granules. This creates excess hydrochloric acid in the water, which can lower the pH of the water. This acidic water can eventually erode the enamel of a frequent swimmer’s teeth. A Centers for Disease Control and Prevention report showed that 39 percent of a swimming team showed signs of dental tooth enamel erosion, and 15 percent of frequent swimmers had similar symptoms, including gritty, transparent, yellow and painful teeth.

A recent study in the “American Journal of Epidemiology” found a higher rate of bladder cancer among swimmers than in those who did not swim. Another study, published in “Environmental Health Perspectives,” found a higher degree of chemicals that indicate permanent DNA mutation among frequent swimmers at indoor pools.

There are alternatives to the “chlorine-only” approach to swimming-pool sanitation. Some systems supplement the sanitizing ability of chlorine, so that less chlorine may be added to the water. These include the use of ozone, ultraviolet light and copper and silver ion generators. While these methods may be costly, they can reduce or eliminate the harmful effects of chlorine.